This is an insight to what is happening to pubs ALL OVER THE UK. It's eroding community spirit absolutely everywhere and together as a nation we are letting it happen.

It's a massive, pernicious cultural crime that's taking place around us. We're all affected. Pubs are the last bastion of Britishness, they're the melting pot of society, the place where class and difference don't matter. Where people are equal. Where young and old learn to be together where people genuinely can experience each other as equals, where difference can be celebrated and cherished and tolerance and inclusion learned from. They're precious and they're being killed off for short term profit by rich greedy sociopathic pricks who don't care about society or community or culture unless they can buy it and put it on a mantelpiece to admire for themselves.

WHEN WILL PEOPLE COME TOGETHER FULLY TO PUT A STOP TO THE CULTURAL CARNAGE THAT'S DESTROYING THE BEST OF BRITISHNESS FOREVER? 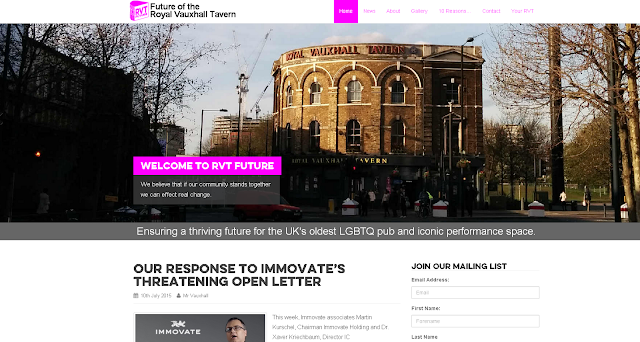 TEN REASONS TO LOVE THE RVT By Ben Walters

From legendary turns to historical relics, police raids to Diana in drag, there’s simply nowhere like the Tavern

To its regulars, the unique charms of the Royal Vauxhall Tavern need no introduction. But for those who’ve never been inside, allow us to present a quick 10-point primer on the south London boozer’s unique contribution to the fields of history, community, art, architecture, social justice, gossip and – oh yes – good old fun.

1. The RVT is needed now more than ever

‘Sure,’ you might think, ‘this sounds a place with a lot of history. But times change. What does it have to offer the future?’ In fact, the Tavern’s unique past is the very thing that makes it so vital to London today, and tomorrow. It’s an institution in the very best sense – a rich network of people, knowledge and experience built up over decades to address the emotional, cultural and recreational needs of thousands of people whose lives remain outside the mainstream in many ways. As well as a place for a pint, a laugh, a dance or a snog, the Tavern is a highly sophisticated machine for generating art, community and wellbeing – things our society needs now more than ever – things that can’t be left to market forces. It simply can’t be replaced.

2. It’s located at ground zero in the history of modern fun

Constructed between 1860 and 1862, the Royal Vauxhall Tavern was the first building on the former site of the Vauxhall pleasure gardens. The world-famous attraction closed in 1859 after two sensational centuries during which it arguably created modern leisure culture. For the first time, mass audiences could afford access to cutting-edge music, art, fashion and food, all in one place: it was where Britain fell in love with cocktails and pop songs, as well as Handel and Hogarth. Royals, shop assistants, drag queens – everyone went, and what happened in the woodland walkways stayed in the woodland walkways…

3. Its metal columns might be the last physical remnants of that bygone era

Those metal columns inside the RVT that sometimes block your view of the stage? There’s reason to believe they’re the last known remnants of the pleasure gardens. The gardens were famed for their column-lined promenades and pavilions, and a bunch of kit – including metal columns – was sold at auction in between the gardens closing and the pub opening on the same site. Given that the owners of the pub designed ornate brickwork frontage and chose a name that evoked the site’s history – by 1859 they were the Royal Gardens, Vauxhall – why wouldn’t they snap up some iconic objects as well?

Vauxhall was a well-known early cruising spot, while unconfirmed reports describe drag acts at the Tavern as early as the 1880s. For obvious reasons, detailed records of such activity are scarce but the RVT certainly had a queer clientele by the 1940s, if not earlier, initially alongside drinkers who were straight – or at least straight-acting. By the 1950s, drag was a staple, with performers frequently running along the large curved bar that used to dominate the pub, sometimes sending drinks flying. Of the numerous gay venues operating in London at the time, the RVT is probably the only one still going.

5. It’s a cradle of drag royalty

The RVT’s roster of regular performers reads like a who’s who of post-war British drag history: Jean Fredericks, Rogers & Starr, Mrs Shufflewick, Lee Paris, Adrella, David Dale, Regina Fong, David Hoyle, The DE Experience, Timberlina, Charlie Hides, the LipSinkers, Myra DuBois and many more – including, of course, Lily Savage, aka Paul O’Grady, who held court there every week for eight years and has referred to the pub as both “the Royal Vauxhall Tavern School of Dramatic Art” and “my spiritual home”. The playwright and director Neil Bartlett OBE calls it home to “the most extraordinary and accomplished avant-garde artists that I’ve ever seen”.

6. It’s at the heart of the story of London’s LGBTQ community

Before gay sex was decriminalised in 1967, pubs like the RVT were crucial to creating a sense of community for people often subjected to isolation, persecution or violence. “They almost fill the role of the family home,” as historian Matt Houlbrook has put it. Connections were forged across barriers of class and age between scene veterans and those arriving from education, the armed forces or out of town. Since decriminalisation, the Tavern has consistently been involved with charity and fundraising work, using models of varying butchness from sports days to drag roasts. Many individual events are thriving micro-communities in their own right – Tuesday night’s Bar Wotever, for instance, has been championing trans rights and culture for more than a decade.

7. When the police raided the pub at the height of the AIDS crisis – wearing rubber gloves – the drag queens started a riot

AIDS devastated London’s LGBTQ community: without any known treatment it was pretty much a death sentence, yet mainstream society reacted with indifference or hostility, including a police crackdown on gay venues. The RVT was a key site of support, coordinating fundraising and open discussion and hosting funeral wakes. In January 1984, 35 policemen raided the Tavern wearing rubber gloves – presumably in case they spilled HIV-infected blood. According to RVT lore, Lily Savage kicked off from the stage inciting something like a riot – SE11’s very own Stonewall – that saw her and 10 others arrested. The fall-out from the incident eventually helped improve police-community relations.

8. Princess Diana once turned up in butch leather drag

The RVT has welcomed all manner of starry guests, from Diana Dors to Su Pollard, Vivienne Westwood to Maggi Hambling. But none is more illustrious than Princess Diana. In her memoir, Cleo Rocos – co-star of the 1980s comedian Kenny Everett –recalls how one evening she was watching The Golden Girls with Kenny Everett, Freddie Mercury and Diana, a pal of both men. When they mentioned their plan to go to the RVT, Diana insisted on coming. So Everett dressed her in military and leather boy-drag and off they went, successfully getting a round in without the princess being recognised.

9. The RVT kick-started a new generation of queer performers

After Duckie began its regular Saturday night at the RVT in 1995 – which is still running today – the Tavern became a testing ground for a whole new generation of queer performance. Its stage saw experimentation from the likes of Christopher Green, Ursula Martinez, David Hoyle, George Chakravarthi, Marisa Carnesky and Scottee, who have since worked with institutions including the Barbican, BBC radio and TV, British Council, Chelsea Theatre, National Portrait Gallery, Roundhouse, Royal Academy, Royal Shakespeare Company, Soho Theatre and the Southbank Centre. And by directly inspiring the Cake Tin Foundation, the RVT has catalysed a recent queer renaissance in Manchester and beyond.

If you saw the 2014 film Pride, about the links between the striking miners and London queer activists, you’ll have spotted the RVT’s cameo when the miners’ group makes a return visit to the capital. The film’s makers were keen to use the Tavern because of its links to the era of the story but they weren’t the first: 1970’s Goodbye Gemini showed the pub, including a drag act, and it’s also featured in novels, paintings, audio drama and numerous reference and guide books.

Constructed as part of a townscape of a dozen-odd streets, the Tavern stood at the apex of two rows of terraced houses – hence its distinctive three-sided shape. But in the 1970s, almost all of the other 1860s buildings were torn down to make way for the park, leaving the Tavern standing alone. Since then, it has survived one attempt to turn it into a backpackers’ hostel and another to demolish it to make way for a shopping centre (including water park and ‘snow dome’). Now, with Vauxhall one of the hotspots of London’s luxury property development boom, its future is again in doubt. But we love it. And, if need be, we’ll defend it.

By Ben Walters, author of RVT Future’s 15,000-word application to English Heritage to make the Royal Vauxhall Tavern the nation’s first building to be listed in recognition of its importance to LGBTQ community history
Posted by J Mark Dodds at 8:18 AM