I Think I LOVE Russell Brand

I REALLY like THE SUN coming up with this front page. It's so sweet of them that I wonder if Rupert Murdoch has behind the scenes had an aged epiphany and decided to become a socialist anarchist and come out secretly in full support of promoting Russell Brand as the next President of the World.


We, the most hypocritical of all 'newspapers' on the planet, BRAND BRAND, a person who very clearly is NOT a hypocrite, 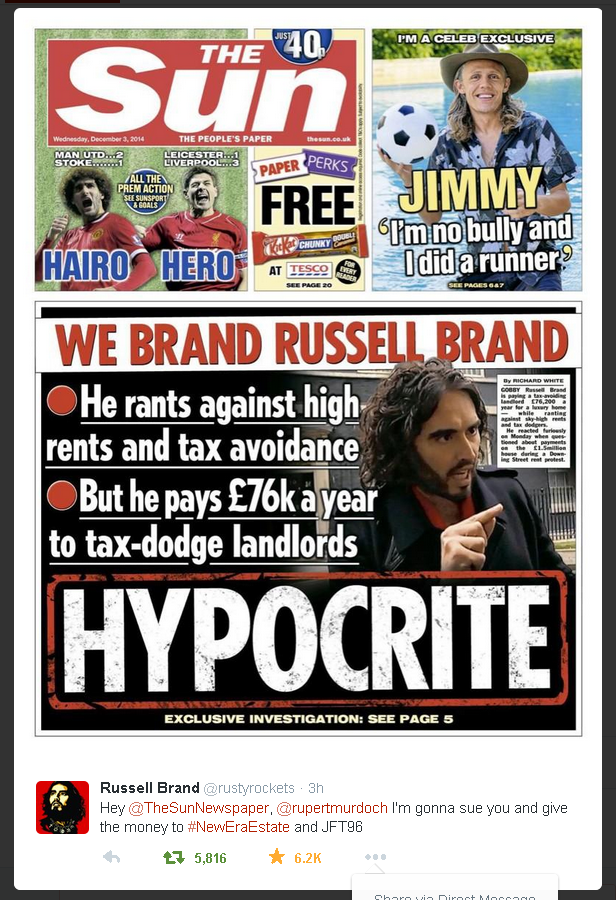 I posted this on my facebook page late last night (02.12.14) and I reckon that today it's probably had more shares and comments on different threads than anything else I've ever posted. This is a pretty sure fire sign that Russell Brand is onto something quite big. What strikes me is that Brand has split people's opinions because he is a comedian and has long hair and has done some silly things and because of that they don't like the fact that he's getting in the news all the time...

Brand acknowledges all these things and is dealing with them. He is intelligent and on mark, the reason he is being railed against is simply because he is right and his message is accessible. The status quo cannot stand it because he is connecting with millions of people simply because he talks sense. Left intellectuals can't stand it because they wish they had people listen to them the way they listen to Brand. Libertarians can't stand it because he is popular and they don't allow themselves to read/hear what he is saying and dismiss it before their scepticism is pricked and they begin to think 'hang on, he's talking sense' ... and so on. It's that kind of stuff. AND what particularly irks, I think, is that Brand's message is NOT in soundbites and sloganeering, he is delivering a message that is holistic, thoughtful, complex and joined up AND people are listening!

Russell Brand is straight up; on the ball and he is right. He's actively researching his position. He's perpared to admit his frailties. He's happy to admit he doesn't have answers. He pisses people off. He's opening up people's minds.

Brand is talking from an intellectual position as well as from an emotional. He is presenting a serious position, he is being frank, as open, transparent as he can be. That he empathises appropriately with real, ordinary people who do not have a voice is good. They understand what is what.

HE is opening up an URGENT debate that has been needed urgently for the best part of a century. Certainly since Gaia hypothesis in the 1970's. Our existence is at threat. No more, no less. The reason he's causing so much interest is because these things need to be brought into the open. They don't get into the open because the answers are not prescribed - the solutions are not clear. National debate does not like debate it likes answers. It is BRAVE to stand out and say 'we need to change everything, we need a revolution, and NO I don't have the answers' He is RIGHT to be doing this. There are no easy solutions. There is going to be disruption to the consumer paradigm. There already is. We just haven't fully felt it yet. But the solutions that WILL emerge sure as damn it involve overturning everything we take for granted now. These things are too demanding for normal conversation. So they don't get talked about. They need to be resolved. And talking about them is where it begins.

I think I love this man.

The below, at the risk of over-egging a pudding, is an additional take on the situation

Brand is well read, well researched and very honest about himself. He has been trying to watch his Ps and Qs of late because he realises his more effusive lampooning gets picked up on and lampooned.

What he's said about voting for some things is not inconsistent with his position on democracy - on some issues a vote is the only way some things CAN be changed until we have a different paradigm (MRO for tied pub tenants for example, of which I am proud to say, I had a part in bringing to parliament) while voting in the wider societal arena manifestly does not achieve outcomes that benefit the majority of people in society.

Some of his delivery is irritating, some of his writing is too - there are a couple of grammatical howlers in the opening paragraphs of his REVOLUTION book which a friend bought for me and I am reading out of courtesy (but have to say that with patience applied I've not read anything but joined up thinking so far) and beginning to enjoy... He is definitely not a Farage and he definitely is not self serving. He loves people. Real, ordinary people. He is aware of the wider world and at base his thesis is right. In consumer society we have created an unstoppable madness that is consuming the planet. If we do NOT have a revolution in everything we do we are fucked. I'd consider voting for him.

And for those of you who think Russell Brand is a lightweight here's a great example of his form with George Monbiot, another honest broker of what really is happening to the world:

UPDATE 05/12/2014
The Sun's original story which, really was very oddly a non-story as it seemed only to be accusing Brand of paying rent to a landlord who doesn't pay tax. ? Something unresolved there. But Brand certainly doesn't seem to have anything to hide... SEE
Maybe Brand owns the company he rents his flat from eh? I mean I have a couple of millionaire friends who don't 'own' their 'own' homes.NO they rent them from offshore companies called something like 'Pension Fund Trusts' or 'Real Estate Investment Trusts' (REITs) who 'own' the homes, companies who are set up to 'own' their homes, on behalf of 'them' (my friends) so they can avoid paying tax on 'the' homes 'they' don't 'own'. I know, I know, it's a bit weird. People like me. People like me just cannot understand all these complicated things. Someone like me who USED to 'own' a home like other people do (after I rented for decades) by having a massive debt called a mortgage but then spent three years being homeless which, because I was almost in the gutter gave me a priority housing situation which ultimately led to to a co-operative housing association understanding I had nowhere else to go to and offering me a flat on a fair rent that I can REALLY call a 'home') People like me cannot comprehend these things. You buy a home then don't own it. You work for yourself but you don't because you work for a limited company that has the same name as you but it's limited and it pays you dividends instead of PAYE and NI and stuff like that. You have to be very very clever to know these things. Oh. No. You. Don't. You have to be rich. Because otherwise they don't apply.

UPDATE ABOUT HYPOCRISY FROM BRAND


And now from THE CONVERSATION

Russell Brand: a hero for our times?