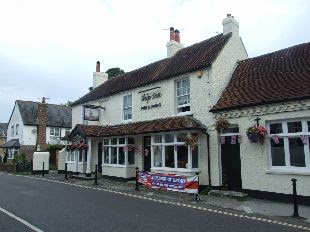 In spite of the obvious fact that this pub would be thriving as a pub - just look at it - if it were properly looked after, maintained, invested in and stocked with decent products served by willing, knowledgeable people who were well managed, this pub will never serve a pint again, never be the hub of the community, never be a central part of the bedrock of British society, never be a pub again. All because a few fools in suits decided to rip the heart out of Britain's heritage and traditions by asset stripping our pubs... and make a few £billion for offshore investors and £millions for themselves along the way.

The people commenting on this article, and people out there generally, don't get it at all. They are completely disconnected from the reality of what happens in the pub sector ON THEIR DOORSTEP. They TOTALLY miss the point. We live in a reality where Tesco, Sainsbury, Morrisons, Coop get more blame for the conversion of pubs to supermarkets than the pubco's who sell the pubs to the supermarkets. It's ludicrous but understandable. It's a consequence of the Great British Pubco Scam that is all around us all over the UK #GreatBritishPubcoScam.

The reason the pub's going to become a Morrisons is directly due to the fact that Enterprise Inns ran it into the ground over years, under their 'Low Cost Entry Business Model' by asset stripping the lessees comprehensively, so preventing any substantial investment from ever being put into the building, leading to the pub becoming more and more dilapidated and unsuitable for trade in the contemporary market setting. IT attracted less and less able or experienced publicans and became a poorly run, run down pub available leasehold/freehold suitable for alternative use.
The Great British Pubco Scam continues apace.
The reason the shop owner's business is threatened is because of the wholly  dysfunctional British pub market. The irony here, and this is happening all over the UK, is that the companies (people) who've failed the pubs, their leaseholders, their customers, their communities, the general public and British society, our heritage, traditions and way of life are the pubco's who are entirely responsible for the demise of the pub. Yet it's the supermarkets and private developers mopping  up the broken pub sector's mess who always get the blame.
Enterprise Inns should be in the firing line here, not Morrisons or the people who leased the pub. Their businesses failed serially due to sky high rent and double open market supply prices making the pub unviable.
If the pub had been owned and managed responsibly for the last twenty five years rather than run down by tied pubco freeholders asset stripping their lessees there wouldn't be an issue.  The pub would still be going strong serving the community and the shop owner's business would be busier as regular pub customers would stop off over the road to get supplies for home.
Posted by J Mark Dodds at 9:25 AM