This article is evidence enough that the Tied Pub Sector is an appalling joke. A business travesty. Corporate Britain at its worst. 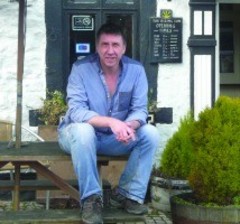 Dave Mountford is 'controversial' because he stands up for his basic rights as a tenant while THOUSANDS of others are being rolled over and duffed up by pubco thugs in the background.

When ONE tenant out of THOUSANDS returns a rent review result that he 'can live with' it's done in private, outside of any 'guidelines' which are routinely trampled over by pubcos with carts and horses. It's only because Dave fought every last step of the way; spent years standing his ground; learning how to deal with obstructive, belligerent and recalcitrant freeholder, getting involved with national campaigns; trades unions and personal representations to government. Wow. Is that all you need to do as a pubco tenant to survive? Become a nationally recognised 'controversial' tenant?. What is going on?

Look at the state of the nation's pubs. What's left of them. It's staring everyone in the face and has been for decades. And there's no end in sight; it's just getting worse. Pubco's continue to return £millions of profits while their estates become more and more dilapidated as their tenants cannot afford to invest in their own businesses.

In spite of all the hoo ha following Select Committee after Select Committee the whitewash is splashed around everywhere. There is no scrutiny, policing or oversight in the pub sector in any way shape or form. Pubco's get away with routine abuse of tied publicans everywhere because they can.

12 pubs a week closing nationally. Where does that figure come from? BBPA? Thin Air? PAH! One national agent alone had SEVEN 'new to market' pubs 'suitable for alternative use' just yesterday. It's a scam.
Posted by J Mark Dodds at 3:08 AM