Went to see Mervyn King do the annual business lecture for the Today Programme. Hosted by Evan Davies. Applied for this exclusive event weeks ago. Looked out for the email confirming four places, nothing came. Thought 'must have missed it, it's such a popular gig, no wonder.' Then, out of the blue Monday got the invitation by text:

"We're looking forward to seeing you on Wednesday 2 May for the 2012 BBC Today Business Lecture at the BBC Radio Theatre, London. Enjoy the show!" 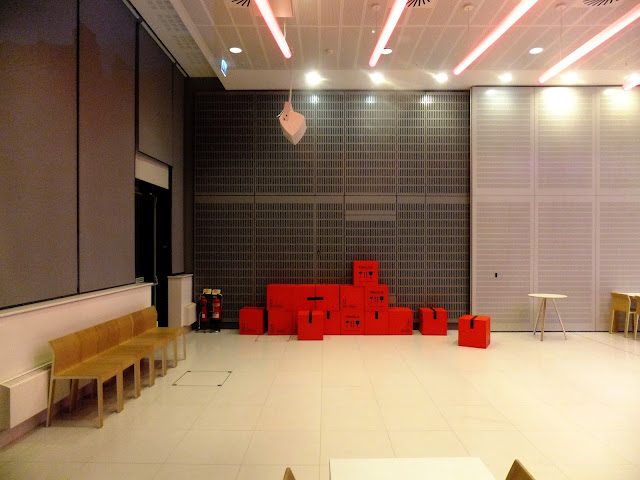 Packing It In at the BBC

Now I don't know what that sounds like if it's not a pretty firm invitation. I checked emails again and there was nothing. Thought: 'Odd. But then they did say successful applicants would be contacted nearer the event'... 'Must be one of those special invitations you should be discrete about In case it goes viral and too many people get wind of it'. Illogical but then so was getting that text.

So, obviously, we didn't get in. They were oversubscribed. So we went to eat something instead.


Been wanting to go there for AGES, can't afford those sort of prices, couldn't get in with friends who'd taken me there on chance before because they take bookings and are always full from about 8pm on. This time, unable to get into one of the other, obviously much less expensive, good places locally - like Polpo for example - who take no bookings it's just first come first sat down, who were full full full with an offer of an hour and a half wait, too long to hang around so I thought/suggested to my friends: "it's only 6.45, how about going round the corner to see if there's a table at NOPI? They could probably get us in and out before 8.30." What a great idea!  -  DOH. No.

We went. Almost empty restaurant - NOT A GOOD SIGN when there's throngs of people milling around the area trying to find a place to sit and eat in a decent restaurant. Means either 1) they (the passers-by) don't want to be there or 2) they don't know (the restaurant) how to run their reservations book and they are turning people away because they booked out the room for 8pm and fear they ca't get chance customers out in time for the bookings to sit down without a wait. Went in. Woman at the door looks nervous, 'have you booked?' Takes a whole thirty seconds looking down at the page then - 'we are full but can sit you at the communal table if you are OK to leave by 8.15pm". 'Great fab thanks very much OK let's do it!'

SO we were ushered through the almost empty restaurant, save for two tables it was pristine, past staff saying 'good evening' 'how are you?' all smiles and friendly. All very nice. Nice, but a foreboding arose as I wondered: "where's the communal table then?" Downstairs is where.

Downstairs are two long wide tables at counter height with high chairs that run off from the open theater kitchen. four people already at the far table and five at the one nearer the kitchen where we were put. Nothing wrong with any of this - nice view of the kitchen - other customers looking at menus attentively, calm space. But to be busier downstairs out of sight of passing trade and an empty restaurant waiting for the bookings to come in is just, well, just silly. One of my friends said: 'It'll be weird going back upstairs at 8.15 to see the restaurant packed". My response was - 'It's likely not to be full, they don't know how to manage their book'. Nod of approval from Brad, who knows better than I do how to run a busy restaurant floor. The rest was sadly predictable. I'll try to get round to describing it when time permits. In the meantime ...

The evening went from the prospect of an exciting, free event hearing titbits and self congratulatory blather from the most important banker in Britain to being an expensive, slowly rolled out and built up anticipation of great, memorable food in sublime surroundings to slowly, inexorably, predictably being let down at every step of the way and leaving somewhat rather irritatedly irritated.

NOPI is inexcusably not what it should be. It's Dull dull dull. DULL. And pretentious. Think of a Fino sherry at £5 for 50ml (50ml is a large shot of gin, for example, Fino is a wine, to be drunk like, well. Wine) then extrapolate and you'll get the picture for the rest of every part of the meal.

Can't be bothered to say just how dull it really was. Except they didn't have Cauliflower Cheese on the menu. They did have these two bite size pieces of mackerel at just £11.00 for a sharing dish though:

Put it like this - if you buy Otto's excellent cookery book and follow any recipe to the instructions - you will get a FAR better meal than one at his restaurant where you WILL get some stuff that's not as good, lacks delicate nouances of flavour, finesse of presentation or any form of WOW other than: "wow, THAT costs £13.50? Really?"

There's no way the staff will produce anything better for you if you book - they aren't up to it no matter how much they smile and ask how it is and try to get you to order sillily expensive cocktails when you don't want to order a pedestrian bottle of wine from a dull list that starts at £26. A carefully chosen meal of seven dull dishes and two glasses of OK wine cost £100 for three when round the corner without the fuss and the rarified atmosphere you can get more food and drink and a better meal all round for sixty quid. Rubbish.

Otto - Get A Grip. Get on the floor, get in the kitchen and give them a kick up the backside.