The Sun, of all papers, is the one who's closest to covering the situation about pubs accurately and why they're closing all over the show to leave a gap in British culture and history: 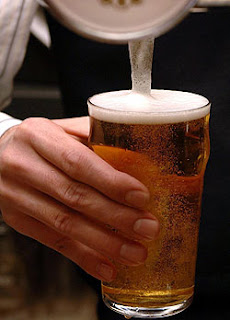 Unbeerable
Brits get stung for extra 15p a pint
By STEVE HAWKES, Business Editor
Published: 08th February 2012
THE price of a pint is going up by as much as 15p — after eye-watering hikes by Britain's two biggest pub companies.

Both ENTERPRISE INNS and PUNCH TAVERNS have increased the prices they charge tenants.

The rises will hit more than 11,000 boozers — a fifth of pubs in the country.

And last night tenants said they had no other choice but to pass them on to punters. One said: "It's a nightmare." 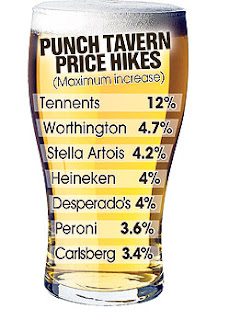 A stunned tenant told Sun City: "Each year they're trying to snatch a bit more from us. Remember this is before the Budget, so they'll put prices up again then."

Enterprise and Punch tenants are "tied" to the firms and fined if they buy booze on the wholesale market.

DIAGEO put up the price of draught Guinness by 5 per cent. WELLS & YOUNG'S put up the wholesale price of its brewed beers by 4.9 per cent.

But one tenant said: "People like Enterprise get huge discounts from the brewers. We don't get those savings."

Enterprise said yesterday it does not discuss "private and confidential matters".