The Death of the English Pub

THE DEATH OF THE ENGISH PUB
Christopher Hutt 1973

The first three pages of this book, written in 1973 - one could, barring a little detail, republish today  (as of course I am doing to make a point) change the names of the 'Big Six' and pass it off for being written about what is happening to the British Pub RIGHT NOW in 2020 (before the inevitable cleaning out of thousands of pubs that don't have the financial stability to survive coronavirus lockdown, government and societal insousciance). Why beer writers and CAMRA (Campaign for Real Ale) do not take this in is beyond me.


Some of us - ME included almost as a lone voice - have been saying for over a decade (It's like climate crisis) that collectively we need to ACT to save pubs NOW for perpetuity because they are almost gone. We have been standing by witnessing Hilaire Belloc's precient warning from his 1911 pamphlet 'Of This and That' and ignoring what's been happening at the hands of, first hedge funds and more recently, vulture capital as pubs are rendered to alternative use on an industrial scale of 1,000 community pubs are sold off by pubcos every year.  That is white collar cultural criminals posing as 'pub company' executives wilfully converting OUR pubs in to THEIR cash ... 10,000 pubs chronically starved of investment for decades have been shut down and sold for alternative use since 2010 ... this is causing unconscionable damage to Britain's sense of place, eroding community cohesion, fraying the very fabric of society. We HAVE to change this; Collectively, we CAN.

Below: full text of the first three pages of the book's introduction

The Death of the English Pub
Introduction

'When you have lost your Inns, drown your empty selves, for you will have lost the last of England.' HILAIRE BELLOC 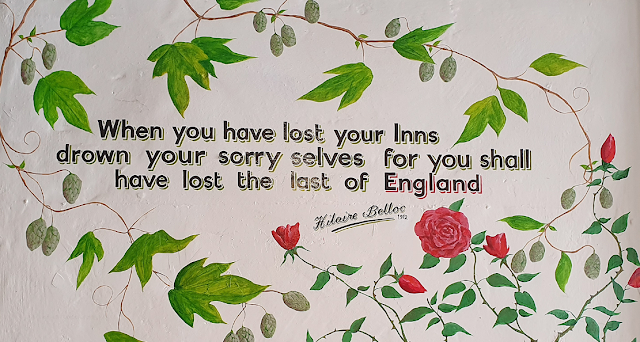 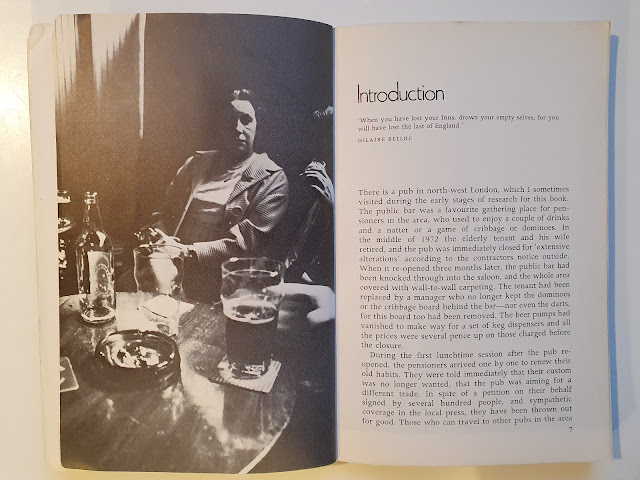 There is a pub in north-west London, which I sometimes visited during the early stages of research for this book. The public bar was a favourite gathering place for pen-sioners in the area, who used to enjoy a couple of drinks and a natter or a game of cribbage or dominoes. In the middle of 1972 the elderly tenant and his wife retired, and the pub was immediately closed for 'extensive alterations' according to the contractors notice outside. When it re-opened three months later, the public bar had been knocked through into the saloon, and the whole area covered with wall-to-wall carpeting. The tenant had been replaced by a manager who no longer kept the dominoes or the cribbage board behind the bar—nor even the darts, for this board too had been removed. The beer pumps had vanished to make way for a set of keg dispensers and all the prices were several pence up on those charged before the closure. 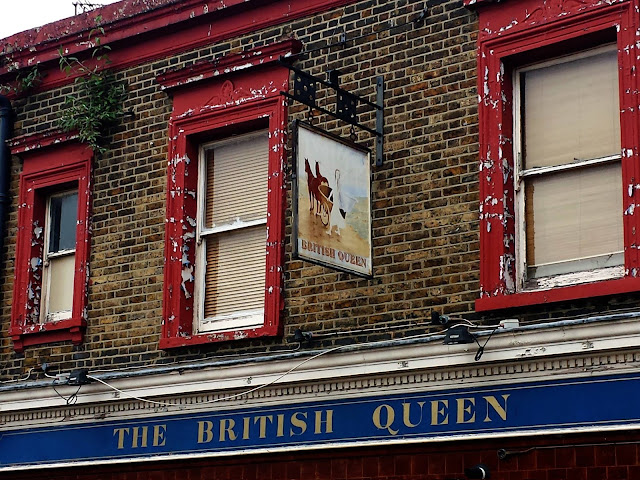 During the first lunchtime session after the pub re-opened, the pensioners arrived one by one to renew their old habits. They were told immediately that their custom was no longer wanted, that the pub was aiming for a different trade. In spite of a petition on their behalf signed by several hundred people, and sympathetic coverage in the local press, they have been thrown out for good. Those who can travel to other pubs in the area do so in smaller groups: those who can't, stay at home. This is not an isolated case. There are thousands of similar instances, many not quite so devastating to the local community, some even worse.

The nature of most of the pubs that we know and have used has been changed out of all recognition in the last ten years and the bull-dozer still seems to be gathering power and pace. People sit in bar corners bemoaning the declining strength and flavour of their pint. Articles about the destruction of character in old pubs appear in the press from time to time. When a tenant is given notice to quit by his brewery so that a manager can be installed, his regulars usually get up a petition. With a few exceptions, however, people have not effectively resisted the changes that have been forced upon their pubs. On the face of it, the reason could be that they do not care about these changes, even that they welcome them.

Anyone who knows a pub that has been tarted up and given the gimmick treatment, or where a longstanding and popular tenant has been sacked, or where the local beer has been discontinued after a takeover, will know that this is not true.  People do care greatly about what happens to their local.

The problem is that where English men and women are quick to organise effectively when their home is threatened by a road scheme, or their work by a redundancy plan, they quite naturally prefer to take a more casual approach towards their leisure facilities, in the relaxed but misplaced belief that these will not be spoilt. 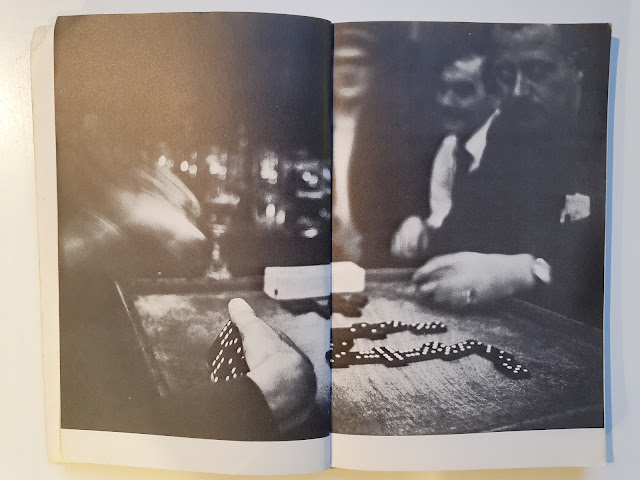 The growing band of environmentalists, while they are beginning to achieve so much in so many areas, have a blind spot where the pub is concerned. Its preservation should be among their highest priorities. After home and work-place most people probably spend more time in their local pub than anywhere else, more so even than the supermarket, the cinema or the local beauty spot. Some people may disapprove of this, but it is nevertheless a fact. What happens to a happy spirited pub, however smoke-filled the atmosphere, and even if too much alcohol is occasionally consumed, is just as much an environ-mental issue as the future of Covent Garden, or what we do about pollution in the River Trent.

This is not to say that all change should be blindly resisted on the assumption that what is old is always best.  Of course the pub is bound to change in some ways, and indeed needs to do so if it is to keep its vitality in the future.  A great deal of money has been well spent in providing kitchen facilities so that people can have a snack as well as a pint.  The standards of modern sanitation are obviously preferable to those of the nineteenth century on grounds of both hygiene and comfort. Not all old pubs are cheerful and welcoming, and those which are not can certainly benefit from a careful facelift. But items such as these account for only a small proportion of the brewers' massive spending on their tied estate.  Much of this budget is used to force unwelcome change on unwilling con-sumers, and this is what the argument is about. 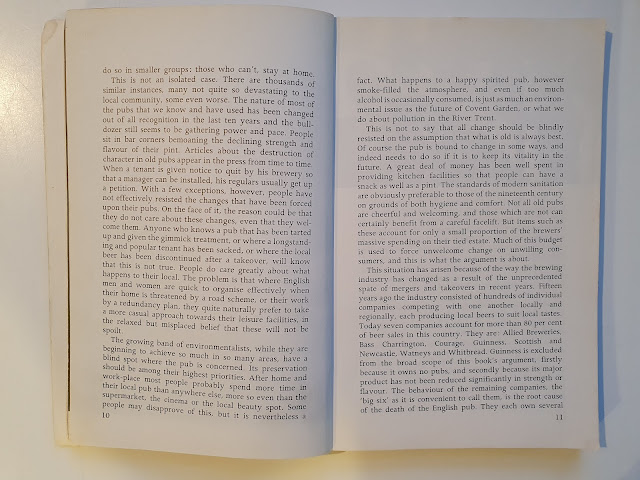 This situation has arisen because of the way the brewing industry has changed as a result of the unprecedented spate of mergers and takeovers in recent years. Fifteen years ago the industry consisted of hundreds of individual companies competing with one another locally and regionally, each producing local beers to suit local tastes. Today seven companies account for more than 80 per cent of beer sales in this country.  They are: Allied Breweries, Bass Charrington, Courage, Guinness, Scottish and Newcastle, Watneys and Whitbread.  Guinness is excluded from the broad scope of this book's argument, firstly because it owns no pubs, and secondly because its major product has not been reduced significantly in strength or flavour.  The behaviour of the remaining companies, the 'big six' as it is convenient to call them, is the root cause of the death of the English pub.