There has been such a ridiculous furore about Corbyn #TrainGate and speculation - as with everything else the man does - he's being fingered for ineptitude, hints at lies and much more... It is PATHETIC. Mainstream news Britain manages to behave like a badly brought up spoiled brat child all the time. Truth is that British infrastructure is a shambles and a total rip off and bits and pieces of 'scandal' like this one are used to distract we the people from the reality we live with every moment of our lives: WE ARE DECADES BEHIND where we should be as a post industrial 'civilised society' in just about every measure one can think of ... Very recent Olympian successes are some of the extremely rare exceptions to the rule. And we know why that is, don't we? The proceeds of gambling (after gigantic profits taken by administrators of the gambling) have been used to fund sports.

Well. I wasn't on THAT train with Corbyn but I use the East Coast line a LOT and the scenes described are absolutely common during busy periods. THIS is a post I made on Facebook on 11 July about Virgin Trains. 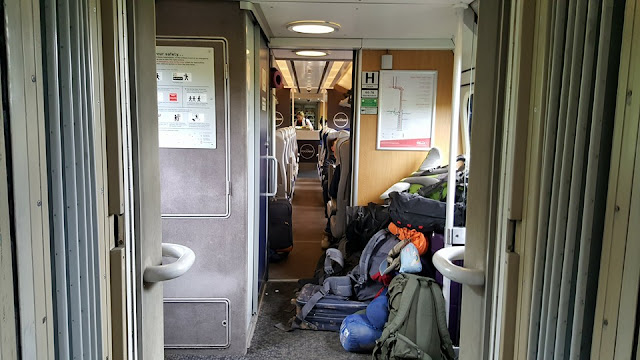 Under resourced. I'm on the east coast train from Aberdeen to London. Picked it up at Berwick-upon-Tweed. My reserved seat is in coach E where the air conditioning is broken and the carriage is unbearably hot. So I've moved voluntarily to the buffet, sorry FOODBAR, car, where there are free seats and the air is cool, in fact uncomfortably cold, and the carriage stinks of sewage, overlaid with high notes of stale male sweat BO and hints of fresh strawberries, from the lollipop the young woman in seat 55 (aisle) is sucking behind me.

This joy all after Andrea Leadsom stood down because of the abuse she received for gallantly standing for Little Britain on a ticket she said two years ago would plunge the UK into a ten year recession which she switched into being an opportunity for her children and grandchildren that Theresa May would never understand because she's a sad, barren woman without commitment to the future. And now 'we' have an unelected 'leader' to 'take back our country' from the faceless bureaucracy of Brussels which imposes laws its member states have no power to opt out of, except for when it comes to pubs and the beer tie etc... which is another story. . . And we have no one who set us up for the charade of Brexit in place to actually begin to manage the colossal workload of 'our' extraction from decades of administration and habit that embedded half the population with the belief they are, actually at heart and soul, European... And only people who wanted to stay in Europe are left 'in charge' to LEAVE

YOU could not have made it up. Sitting in this stinking privatised Virgin train where it's either too hot or too cold is just a wonderful pause for reflection of this utterly nonsensical situation that we the British (English largely) like to consider a 'Great Nation'. Let's use an analogue everyone can compare our situation to: Britain is like our pubs: reduced, broken, run down, smelly expensive and failing everywhere, failing everyone. It's unavoidable yet we just put up with it and persist in believing 'our' fetid gutter press that anything that doesn't work is the failure and fault of foreign forces abroad in Britain.

It's all so ironic it's impossible to fully grasp how we find ourselves, everyone in the UK, let down by our politics, our fellow sufferers and our corrupt, asset stripping, ordinary salt of the earth people hating cultural stupidity. We're like a parody of Vulgaria, the fictional country in Chitty Chitty Bang Bang where the child snatcher is as important as the ridiculous Emperor who's a buffoon incapable of running a pissup in a brewery.
Posted by J Mark Dodds at 11:43 AM