A Chat about Pubco Claims, Misrepresentations and Scamming at Source

Came across this conversation on a thread today:

Robert: "Enterprise, with you every step of the way through your journey to becoming a publican."

Andrew: 'Oh Robert are they there when you want MRO? I think they run for cover when "local breweries" are mentioned with a quick retaliation of "you've got SIBA, you've got SIBA!"
They really do take the bloody biscuit'

Sean: '"Enterprise you will hear from us whenever you miss a payment, until that day you're on your own" - 6 long years of meeting every payment and getting no help, not bitter though'

At this point I came across the thread and got interested:

Me: 'The enterprise website, and all the pubco's websites are full of Bullshit worded exactly like this;
They all say they have the best estate, the widest range of pubs to suit all lifestyles, the best provenance, the most flexible range of lease 'agreements', the best and most desirable brands and product support, the best supply flexibility and discount deals, the best training, the best teams of area managers, the best accounting and back office support, the best telephone helplines the best of fucking absolutely everything and anything you can imagine anyone starting out a new business relationship with a big partner could ever, in a month of blue moon Sundays, ever want...

Spend a day checking out all the various pubco websites. They all look like they've had the same creative writing workshop behind them. These pages are the shop windows of a Cartel'

Thinking on I searched: "Enterprise, with you every step of the way through your journey to becoming a publican."

Ooh! Just came across this

Wow! There's loads of these things out there scroll down above ...

ONE could NOT make it up: 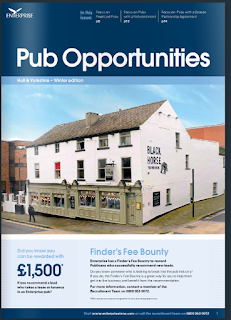 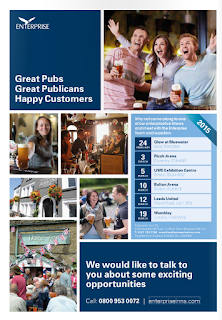 Blimey I just found out who's responsible for Enterprise Inns' marketing and image. It's We Are Bunny

Did a bit more looking around. It isn't We Are Bunny it's an agency called Futureproof - "We are an independent creating lighthouse marketing for challenger brands" the above BunnyBoys worked there when ETI got the miracle marketing makeover. See below. 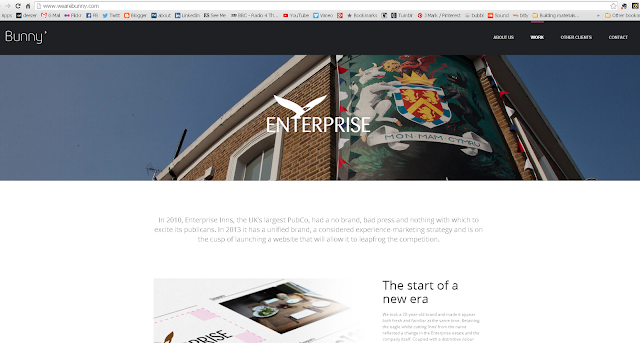 Here's the story in We Are Bunny's words:

"In 2010, Enterprise Inns, the UK’s largest PubCo, had a no brand, bad press and nothing with which to excite its publicans. In 2013 it has a unified brand, a considered experience-marketing strategy and is on the cusp of launching a website that will allow it to leapfrog the competition."

"The start of a new era"

We took a 20-year-old brand and made it appear both fresh and familiar at the same time. Retaining the eagle whilst cutting ‘Inns’ from the name reflected a change in the Enterprise estate and the company itself. Coupled with a distinctive colour palette and an updated tone of voice, the new brand guidelines have now been applied to many hundreds of documents."

With sessions in London, the Midlands and the North, we conducted a series of focus groups to understand what features publicans would need within the website. We took this research and developed Balsamiq wireframes to explain the concept and user journeys to Enterprise’s development team. The creation of a Global Experience Language (GEL) catalogues each element for their team and how to go about recreate it."

Making a lot of information easily accessible at a relevant time and in the right context was the main element of our recommendation. Working closely with the development team at Enterprise, we created a site that is both intelligent and easy to navigate, giving the right information at the right time so that even less tech-savvy publicans are able to find it."

"Making the most of a good thing

To publicise the first round of updates to the Enterprise site, specifically pub search, we designed and produced an HMTL email to be sent to the entire database of registered users on enterpriseinns.com that highlighted the benefits of the new design in an easy-to-read and engaging way. In the week after the email was sent out, searches made on the Enterprise website rose from 1,200 to 4,300."

"Read all about it

Engagement with its publicans was very low, and was compounded by bad press from the lack of any real PR activity. Enterprise needed a way to reconnect with its publicans. We designed and produced a newspaper, deals brochure and email template that would increase the communication channels to publicans in a consistent and familiar way."

"The cherry on top

Driven by the impending introduction of e-commerce for Enterprise publicans, we identified a need for a brand to encapsulate the ways the company interacts with its publicans, and vice versa. We therefore streamlined the brand hierarchy to make it easy for publicans to know which services were relevant to them. We created a suite of tools and associated iconography to effect a unified look:" 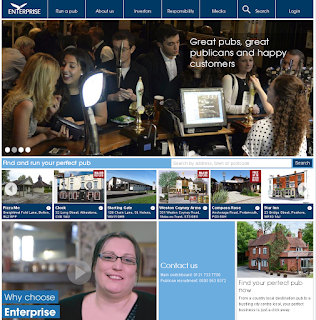 Here's the story in Futureproof's words: 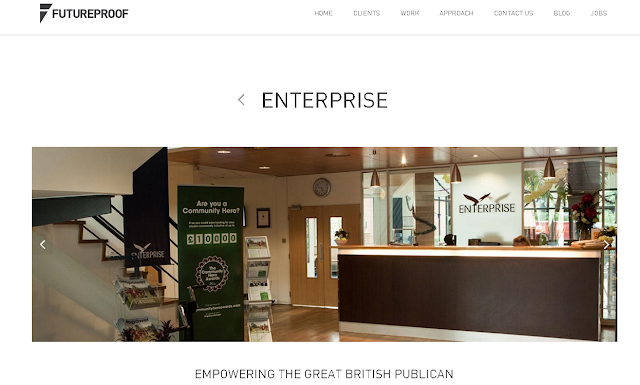 "Enterprise are the largest pub company in the UK, but you are unlikely to have heard of them. That’s because their enormous portfolio of over 5,400 pubs (for comparison there are 700 Starbucks in the UK) are all purposely not branded as Enterprise pubs and are independently run.

An increase in pub closures, and growing pressure from lobbyists to review their business model, catalysed Enterprise’s need for a rethink. They wanted to establish a fresher, clearer and more transparent identity, more fit for the modern world of leisure.

Futureproof were tasked with helping Enterprise to reposition their brand. We performed a significant audit of the company and brand to see what was going wrong and in doing so, we identified three central areas of focus. Firstly, they needed to become a brand with personality; secondly, they were constantly firefighting negative publicity; and thirdly, they had no real way of corresponding with their 5,400 Publicans, sharing best practice and stimulating interaction."

"After conducting research with groups of Publicans, stakeholders, and consumers, we landed on three central ideas to address Enterprise’s problems. Firstly we created a brand, based on the essence of ‘Empowering the Great British Publican’ – and built a graphical and tonal language for the company to consistently communicate within. Secondly we created a CSR scheme called the ‘Community Hero Awards’ – designed to not only allow Enterprise to have a positive impact on the communities their pubs were in, but also to enable them to have positive conversations with the media. Thirdly, we created an online and offline internal communication platform called ‘Empower’ – designed to reignite the relationship between Enterprise and its 5,400 Publicans.

This commitment to marketing and communication was a significant shift for the 20 year-old company who had never really worked with a creative agency before.

The results were dramatic. Not only did relationships with Publicans significantly improve, and Enterprise commit to spending £10million in the local communities of their pubs, but the commercial performance of the business also turned a corner. Over the three years that Futureproof have worked with Enterprise, their share-price has enjoyed a more than five-fold increase, from 27p (2011) to £1.50 (2014). And as of March 2014 the firm reported like-for-like net income growth of 1.1% for the six months to March 31, making it three straight quarters of growth for the first time since 2008."

So. It's all down to marketing then.

Note what he says from 43 seconds in: "Once you've completed and agreed your business plan and terms with us... it's almost time to start your exciting career as an Enterprise publican". I'd say that's a subliminal message implying you have some kind of job security. What it should say is 'your exciting career as a self employed person running a business taking on all the liabilities a large pub company has'.

That's it for now folks. I'll try to find the time to balance this out with some posts about other White Collar Cultural Criminal Scamming Pubco websites as well. Just to show there's not a fag paper's width of difference between them. At least they don't employ all the same people... Hang on! They DO!

Update
Seems that Leisure industry analysts Panmure Gordon don't agree with the marketing companies about Enterprise being Futureproof: "Asset disposals will continue at about £60m per year" That's a lot of pubs to be selling to pay interest on debt ETI raised to buy them in the first place. 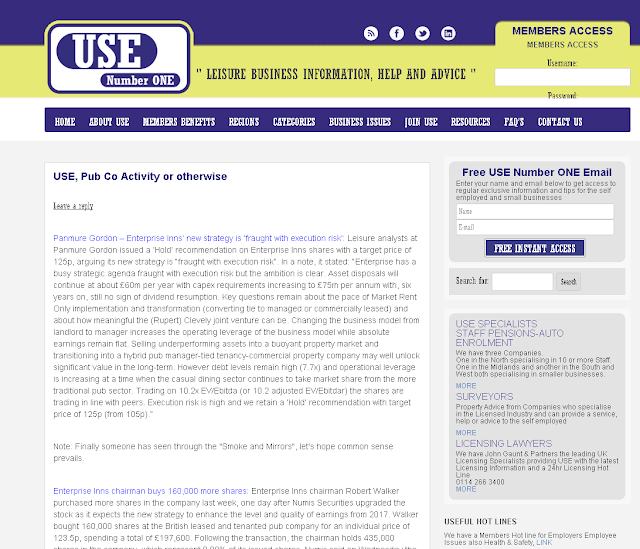