CAMRA has just done a big shit on its own doorstep

This is 5 February 2015 update on the cultural disaster wreaking its way across Britain's pub sector. I've not been able to make a proper post for ages - There's been too much going on. And there still is... so it is going to be a summary of several months of nonsense and this bad move by CAMRA came up yesterday: CAMRA named the odious MP for Punch and Marston's 'Parliamentarian of the Year' and lots of CAMRA members are really, really annoyed. 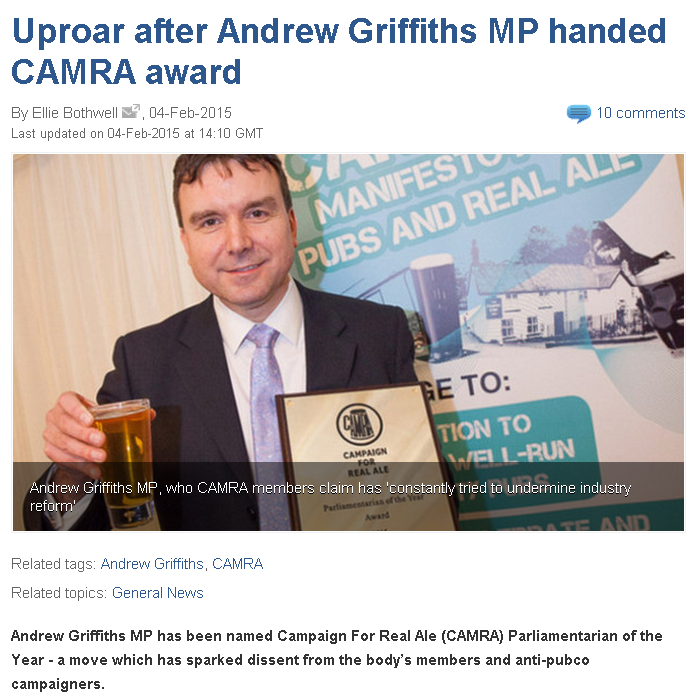 The steady flow of pub failures around the UK has become a roaring torrent. Tesco have stepped down from being the villains of the piece, mopping up the collateral damage created by the tied pubco's race to insolvency and oblivion brought on by debt baggage in the Great British Pubco Scam. That baton has passed to the Co-op, the organisation the government likes to trumpet as being a key part in the 'raft of measures' it's providing to communities to help save that great British institution the British Pub.

Back in November there were encouraging signs that the riptide of private equity avarice engulfing tied publicans and washing away their pubs was turning from them and toward the pubco's: On18/11/2014 a historic vote for pubs happened in Parliament when MPs broke a three line whip as the Small Business Bill came up for scrutiny with an amendment for a 'Market Rent Only option' to be brought into law for tied lease publicans - a measure that will, if it ever gets into law as it was worded, effectively be the beginning of the end of the anachronistic beer tie that is closing pubs everywhere.  The government was so strongly against this amendment that it WHIPPED its MPs to vote AGAINST the amendment and in the end a majority voted FOR the amendment - breaking democracy into the commons in a way that few people with a living memory have ever seen... A Victory for the common people against the Establishment...  This was SO unprecedented it broke into the mainstream press and media and the next day got headlines everywhere from broadsheets to red tops and was repeated in local and national radio and TV news bulletins - coverage of the pub sector that no one has seen since the Beer Orders in 1989. It was widely rumoured that it was such a bad defeat that government would object to the amendment - I still have no idea how that is possible in a democracy but HEY I am just an unusually well informed common commoner WTF do I know about politics in the UK? Not enough, and too much, I discover.

The very next day William Hague announced to Greg Mulholland in the Commons that the government would allow the amendment to go to the Lords Unopposed - completely unexpected - and backed up the depth of the historic victory even more. Being cynical I surmised this was because the level of news coverage was a surprise to the suits in charge. IF the bill had been opposed going to the Lords this massive media spotlight  would have wavered around thinking 'Hang On Why is the Government So Hell Bent on Stopping the Abuse of Thousands of Publicans Who the Majority of MPs Have Just Supported Democratically in a History Making Vote?' ... 'Hang on... What Are They Hiding?' and the news would have turned into investigative reporting and something would have got out... Instead Billy Hague's announcement was reported and the news pack moved on to brighter more shiny things that could be written about and reported on off the cuff without in depth research.

Now the clause has been in front of the Lords three times... I have a lot to say about this but of that later. Enough to mention that law making in the UK is a baffling process and makes a lot of sense that the rest of the world seems to have taken up the lead and copied much of the nonsense we so thoroughly embrace here, hundreds of years of nonsense...


CAMRA have been up there in the thick of it all.

They gave the MP for Punch and Marston's, Andrew Griffiths, their annual 'Pub Parliamentarian Award' for his service to opposing every bit of campaigning CAMRA has ever done to try to make the situation for publicans, their pubs and the people and places they serve, fairer, better, and cheaper for the consumer...

It caused a Kerfuffle

CAMRA members and publicans all over the show HATE Andrew Griffiths - he's not called the MP for Punch and Marston's for nothing. Even though his constituency is somewhere like Burton and Uttoxeter.

In their national magazine, BEER, CAMRA have taken a full page ad from Enterprise Inns - as above - asking CAMRA members to talk to them about their pubs (BAD IDEA)

In the Manchester Ale Festival Punch took a full page ad on the back of the programme - with an offer of £1,500 to anyone who successfully introduced a friend to a Punch pub who went on to signing a tied lease with them - in other words signing their financial death warrant

ONTO CAMRA's taking full page ads from Pubco's - like this one from Enterprise Inns in this month's BEER publication:
Just in case you are not aware of how much money Enterprise make on its sale of cask ale to its leasholders it is conservatively £40net per cask they charge MORE than the publican could buy the ale direct if their lease allowed it. Multiply that by 750,000 and then consider how much ETI pay in interest on their debts then understand why Enterprise Publicans don't like Enterprise. Or CAMRA when it supports them.Also, once you do the calculation above you will then realise why Enterprise Inns HAVE to sell at LEAST 300 pub freeholds for alternative use, every year, just to meet the interest payments on the loans they raised to buy the pubs in the first place - the loans they will never, ever, ever be able to repay EVER.

And THEN consider that the annual rent the majority of individual lessees pay to Enterprise is MORE than the cost of repaying a commercial mortgage on the true value of the pub they run their business, their life, their family and their future out of...

And THEN IF you take out the COSTS of the beer tie - how much more it is to buy beer through the Enterprise profiteering supply chain - supply chain that generally doesn't allow you to buy beer from your micro brewer just up the road - at £40 - £70 a tub more than it would cost you if you went direct.

Then you see that the beer tie is a scam and it is making pub businesses fail all over the country, bankrupting their lessees, and closing pubs and changing the British landscape and society forever, just to pay the pubco's debts.

It is not on. And it is a scam. And CAMRA know this and they are, actually, helping it along by being 'diplomatic' and 'statesmanlike'
And then consider that (failed) ex tied publicans like me, andJohn and others have been making these very clear FACTS very clear to CAMRA and to government for close on a decade (I first met CAMRA HQ on this specific in early 2008 before Fair Pint launched) and that in this time I and people like me have been banned from the Morning Advertiser for pointing out that the publication does not present a balanced view of the market - and THEN people like me are called 'one eyed trolls' and all the rest of it.

And then consider that I personally (and I don't exactly travel the length and breadth of the country touting for tied publicans) have met literally dozens of tied lessees who are too scared, afraid, terrorised, to comment in public - or even to join a secret facebook forum of other lessees - for fear of being caught dissenting by their pubco.

And then you have an inkling of the depth of the scam, yet how much it is largely denied by CAMRA HQ.

CAMRA top brass are academic, remote and out of the loop they simply cannot get their head around the seriousness of what white collar criminal pubco execs are doing to our culture.
Posted by J Mark Dodds at 11:58 AM