It's time to get Back onto Brand with Question Time

THIS post about Russell Brand got more reblogs and shares and comments and reaction than any other I've done. Why? Because a lot of people find it hard to take in things he says like this: 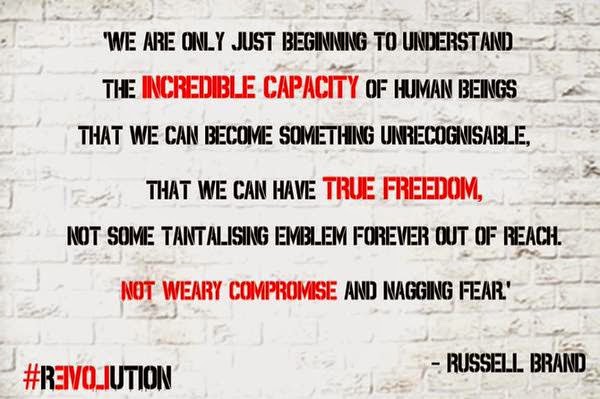 That post was over a week ago and since then Question Time Happened. Ironically much of the reporting on the sparring event of the season is that the commentators aren't listening to what really is being said by Brand. They are all a part of the problem, the problem they all think they are reporting on but which they are hulding up and sustaining.


I couldn't see this BBC Question Time - I was at the first formal meeting of the White Swan Community Pub Working Group - all about building a campaign to raise £1.5 million in community shares and try to buy the pub from Punch Taverns its freeholder... More of that elsewhere

My friend and best selling author Jude Calvert-Toulmin pointed out: 'I'm sure you've read it by now J Mark Dodds. How wonderful is he? I love him' and she posted his article about his appearance on QT, but I hadn't yet seen it,  so I got to read his account before seeing the programme. Been busy with things like saving pubs and spending time with lovely people like my sons. It was Ed's thirteenth birthday so a lot of the day was diverted happily there.

Jude is concerned that Russell Brand will be bumped off by the Establishment. I hope she is wrong, he is a national treasure. No one else is speaking as clearly about what needs to happen to people, planet and politics as he. He is becoming as important, culturally and historically, as our nations' pubs; and THAT, really, is saying something.

Jude commented: "They're going to whack him like they did with Di and Jill Dando. It pisses me off every day watching the whole sordid tragedy unfold I've watched it today Mark and I'm worried about him".

My thoughts on his Question Time demeanour:

He's out of his milieu and feeling very nervous. I know people who've quite surprised me by their reaction about Brand when I've said 'have you been following what Russell Brand has been saying?', some fairly close friends, some people whose views I generally respect, who absolutely hate him with a venom, a bile, that is simply not rational. They literally CANNOT hear what he is saying for the voices in their heads screaming 'he's a fucking misogynist, an ego bound comic, a sixth form debater'. Now I don't fully understand the mechanism that prevents them from being able to hear what this man is actually saying; they are certainly missing what is happening with Russell Brand altogether because of their existing prejudices against the charicature figure of him they have in their brain that doesn't conform in any way to the man he most definitely IS now... actually LISTEN to Brand and you will hear a highly well informed, eloquent, insightful and down to earth visionary who is telling the world what needs to happen to prevent it from being the way it is now - a way which is broken and leading to undoubted, certain, catastrophic painful disaster for humanity globally.

He has researchers. Helpers, he knows that many, many people regard him like that and he is dreadfully aware that QT is a chance to bring a lot of them around to appreciate what he stands for if he performs well above their expectations.

And he's on a panel pitted alongside Farage, it's been touted as a boxing match brawl, a sparring session, a battle of wits and ego. He doesn't want to slip into descending to the level of Little Englander which could so easily happen...

As a comedian he's used to the cut and thrust of rapier repartee with people who are prone to be deliberately acerbic and controversially edgy - here the platform is very different and he's not practiced. He could run rings round the whole panel in one context but has to be very careful in this. He's on double alert trying not to let his ego get the better if him. I think he's having a very hard time being sensible in the breeze of some of the weak blather blowing around the desk, some of which deserves a response of raspberries and mooning. A discussion about immigration that wouldn't descend into violence is a thing too far for this audience.

We have a duty of care to protect this man from the considerable possibilities that Jude is not wrong. He is too honest and well informed not to be dangerous.

If I didn't have his book already. I'd buy it. Here it is again on The Young Turks
Posted by J Mark Dodds at 7:12 PM