The Old White Bear being carved up for private use


What more obvious case can there be for triggering severe regulation of the tied pub sector to prevent Britain's meddling pubco's from destroying ancient traditions and our very Sense of Place for the sake of a quick buck than current reports of Punch Taverns, major custodians of our national pub heritage, flogging off The Old White Bear in Hampstead and The Star in St John's Wood for cash to pay off debts? They recently sold both these pubs to property developers with 'no intention of change of use at point of sale'... Hardly needs thinking about does it? Tied Pubco's are devious, lying cheating corporations out to steal value out of 'their' estates. This is blatant asset stripping and HAS to stop! 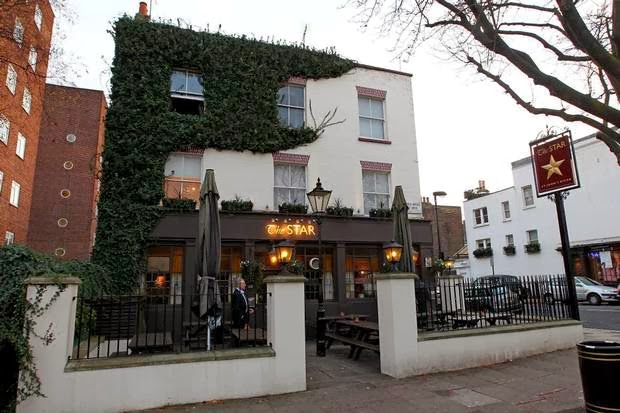 There's no doubt - even from the distant viewpoint of south east London - it's obvious that both these pubs could easily be fantastic vibrant relevant contemporary social hubs and the focal point of their local communities... for generations to come.  Serving great ales and no nonsense fresh food to eagerly appreciative audiences of loving locals.  But no. To the pubco and the developer (sounds like the title of a Lewis Carroll satire doesn't it) these pubs are just more boozers with no possible life ahead in a world that's moved on to wanting Tesco Locals, Paddy Powers and ill conceived and converted speculative housing developments that blight the neighbourhoods for generations rather than having great pubs on the doorstep. I wonder what the lessees of these pubs think of this nonsense? What do they have to say?

Only the deadly money grabbing combination of a dysfunctional pubco and a cash rich property developer could contrive to assert with fat tongue in cheek that a pub with fantastic potential like the Old White Bear has no future viability except as a home.

Shocking how the greedy, grossly indebted pubco's, Punch Taverns here, discard thousands of viable pubs, destroying Britain's rich cultural tradition, our unique social heritage and depriving communities all over the UK of the extraordinary diverse assets that are their pubs, while professing loudly to be in the business of pubs, people, Partnership and Beer.

It is a massive lie. The Great British Pubco Scam has been decimating our towns, villages and urban centres for two decades. Once vibrant communities now have nowhere to go. Not because of cheap supermarket booze and beer duty but due to the pubco's running down their huge estates in a historically unprecedented profligate act of asset stripping vandalism in full public view.

These statements from Punch Taverns' website say one thing:

"Our business model is based on offering the enterprising individuals who run our pubs – our Partners – a flexible split on their pub rental and the beer they purchase from us."

"The Punch Taverns business model is based on our aim to deliver the best standards of service to our Partners, working closely with them to earn their trust and to help them build quality pub businesses."

Sounds fair doesn't it? But Punch's actions prove the Lie.

Punch and other pubco's like them, are in it purely for the money, for the Boards of Directors raking in huge bonuses as reward for destroying Britain's cultural bedrock as they pay only the interest on gargantuan bondholder loans the Directors raised to buy pubs at wildly inflated prices; loans they haven't a hope in hell of ever repaying.

Enterprise Inns' outgoing CEO Ted Tuppen, the 'Dark Lord' of the pub sector as he likes to characterise himself, is famous for describing MPs who don't like his shoddy business practices as 'Moronic'.  Tuppen usually steps up to the tarnished pubco plate to take the biscuit award for Most Mealy Mouthed Twister of Truth in the pub business but recently he's been overshadowed by Punch Taverns' marketing mob who have been close to being open, honest and transparent about their business model with some truly tasty porkers fit for public consumption...

Take this excellent quotable quote Punch's representative made in a recent ACV hearing over one of their pubs:

- "Says who?" Asks Pete Brown, beer writer of the Year 2012, author of the marvellous Shakespeare's Local and Man Walks Into Pub among other great beer and cider writing.

There's no doubt the Great British pubco's deserve a public flogging for the permanent scars they've cut into the British landscape, and across generations of people, as they've slashed and burned their way destroying pubs in the name of creating plummeting shareholder value.

These companies are dull unimaginative emblems of the worst in crony capitalism that's been so ably headed up by our highly skilled and specialist morally bankrupt Bankers.  Pubco's are run down by bean counters who understand the price of everything, the value of nothing, and believe what's theirs is theirs and what is everyone else's is theirs too.

They have no shame.

This parlous state of affairs has to change and it can; together people can create great change!  While there are people out there doing sterling work to bring change about in the pub sector - lobbying and campaigning hard has proved that government is sluggish, leaden and incapable of rapid enough action. The Fair Deal For Your Local Campaign, chaired by Stalwart Pub Champion Greg Mulholland has done much to expose the rot, deceit and reality underlying the Great British Pubco Scam but something hard, tangible and effective that can act without legislation is urgently needed to help stem the tide of tied pub closures. A market based solution conceived for the benefit of pubs, publicans and their punters is what is needed.  And it IS coming:

The People's Pub Partnership currently is a group of professional people who understand pubs and what motivates people to be passionate about preserving and improving them, for now and for future generations, who have come together to create an ethical, crowd funded pub company that has the power to change the pub sector for Good...

In Spring 2014 PPP will launch, and from there on people all over the UK will be able to take a stake in their pubs, give them the investment they need to bring them into the 21st century, and get them back under the guidance of caring publicans with the accountants put firmly but gently at the back office desk where, as they have proved so capably, they've always belonged.

If you want to get involved, have skills, legal, accounting, vision, great ideas about pubs, or would be interested in working with PPP as a supplier or behind the bar, in management of on building projects, do get in touch through the BLOG HERE
Posted by J Mark Dodds at 5:25 PM

Email ThisBlogThis!Share to TwitterShare to FacebookShare to Pinterest
Labels: pubs