OR: Zombies On the Street Corners of Britain.
Punch Failing as Accounts Highlight Inescapably Dodgy Situation
Summary Prepared 4 November 2013 by A B Jacobs

With the annual accounts now published on line it opens up the opportunity to examine the detail in those accounts more closely.  It is interesting to note that this is the first year Punch have attempted to split their data into Core and Non Core businesses.  These are my findings. 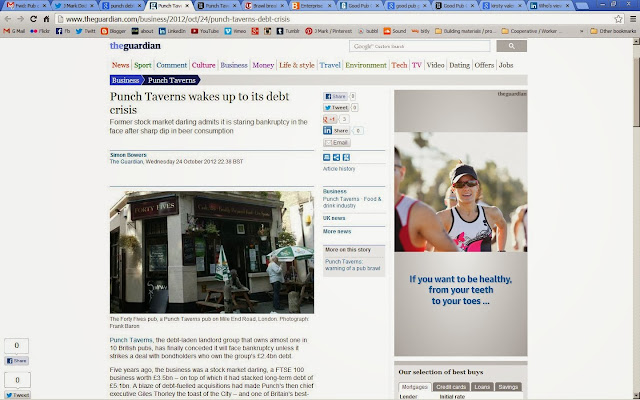 2. The average debt per pub equates to £640k [last year £593k] and they indicate the average value per pub of £643k  [last year £597k].  Even if the extraneous “other” assets and borrowings were set aside the answer would be similar average debt £581k  [£540k] and pubs valued at £585k  [£543k].  Both the average asset value and borrowing per pub has increased over the past year.  These indicate that the borrowing are just about equal to the property value.  But is that correct?  The question must depend on their valuation of properties.  Have they overstated the value of the properties?

6. National statistics indicate that barrelage in the on trade has fallen and that manufacturing prices have increased. The fact that Punch virtually maintained their liquor gross profit margin at 41.8% [last year 42.2%] suggests that they have balanced their cost with the prices charged to tenants.

7. Punch in their rent reviews generally make the assumption that the tenant would earn the same as them, £27k par annum. That assumption would appear to be erroneous considering the independent surveys carried out suggest that at least 67% of pub tenants actually earn only about 50% of that figure, in other words about £15k per annum.

8. With the knowledge of the rental income, wet and lease, averaging £47k and the real income for the average tenant being only £15k it is clear that if those 4096 pubs had been free of tie and owned by the current tenant their average profit would be just £62k per annum.

9. The free of tie profit should be the basis of a pub valuation, mainly because it dictates how much could be borrowed and also the deposit that would be required to secure the borrowing.  This is a very pertinent since it goes towards examining the values that Punch have applied in their Balance Sheet.

10. Any tenant submitting to a reputable lender a profit history of £62k per annum would be extremely fortunate if they could secure borrowings of around £225k, and that would be with a proviso that they had personal funds of about £100k for a deposit.  So an annual profit of £62k suggests that there would be an average supportable value of £325k for each of the 4,096 pubs.  Naturally these are averages, some will be higher and some lower, however when considering the substantial volume and spread of assets the average tends to take care of such fluctuations.  So across that total estate, the total value based on £325k per pub would be only £1,332 million.

11. So here is the problem.  According to the Balance Sheet Punch state the average value per pub, across their estate of 4,096 pubs, and excluding other incidentals, is £585k resulting in their reported total value of £2,397 million.  There would appear to be a substantial difference between the supportable asset value of £325k and the Punch figure of £585k; in fact it is almost double!  The overall difference for the total estate could be an astounding £1,065 million.

12. Bearing in mind that the shareholders funds in total are reported as being £296 million suggests that there could ultimately be a Billion pound shortfall problem.

13. Naturally some Valuers will be jumping up and down claiming that they could secure offers for properties based on multiples of six, seven or eight times the pub profit.  That would mean that they would be claiming that a maximum average value of nearly £500k could be achieved.   Not very plausible!  Even if true there would still be a very substantial shortfall substantially greater than the current shareholder funds.  Possibly there would be a few small corporate buyers that may be able to justify multiples up to eight times profit but that would not apply to the vast majority of pubs at the bottom end of the scale.  It has to be added that conning buyers into paying more than the profit can service could be tantamount to deception or even fraud.

14. The Government have before them a proposed code to ensure that pubcos in their assessment of rentals apply, under Statute, the prime principle that   “the tied tenant would not be worse off financially than if they were free of tie”   That would impact significantly on the profitability of Punch.  On the basis of the limited information available the average income per pub for Punch could fall by £17k per pub, about £70 million a year which is more than the current annual pre tax profit.

The Punch Financial Statements are to be presented to the Annual General Meeting to be held on the 27th November 2013, and it needs to be noted that about two thirds of all the shares currently issued are held by institutions.  In conclusion the examination in closer detail does suggest that the future looks very bleak, not only for the bond holders/lenders who have overvalued assets as their security but shareholders as well.