Franz Kafka, Where Are You? What Did We Do Wrong? 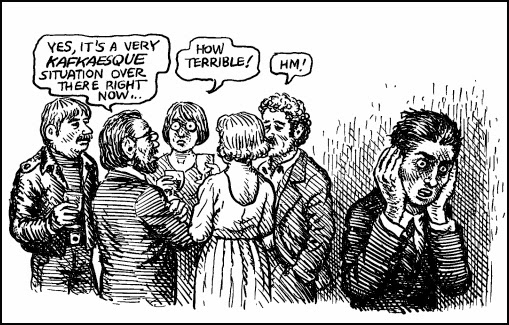 It's not JUST Pubs, it's the NHS, Fire and Sea Rescue Service, Utilities, phone water power and countless other essential things that affect all of us, we the ignorant proles of the 99%, that these woofters in government are attacking. The privileged tossers are storming the bastions of Civil Society in the name of Austerity. We are being sleep walked into a narrow tunnel of unreasonable, mean spirited short sighted retrogression that Victorians would have been appalled to witness.

My ex is a teacher. She's a very good teacher... She trained at London Institute and has taught in inner city schools that all have had Outstanding status. She now teaches in a Junior and Infants' school that has had a very good reputation for decades, where both our sons were educated, where we both have been governors and know the staff and the children, their parents and wider community well. It's in the middle of some of the poorest, most socially and economically deprived Wards in Britain. It consistently achieves excellent results across all its intake... When you visit this school there is a palpable feeling of good community, the children are well socialised, friendly, polite, helpful and well behaved.

My parents were teachers, my father a Head for decades them County Education Advisor. My mother lectured Social Sciences and head of department at a large County Technical College in a totally male dominated engineering and mining background culture. She must have had to kick ass to get there and stay there...

Oh and I went through the state education system myself, went to a junior school in Newcastle (Tyne), with a hard working working class intake, that was good enough for its time but makes the one my kids went to look like Eton. A measure of that may be that I was the only boy in my year to go to grammar school... Then I had an all boys' Grammar school experience and then, as that school blended with the neighbouring all girls' Grammar and two Secondary Moderns and became one of the largest Comprehensives in the country, had some Learning of how disruptive politicking can be to kids' - everyone's - education. I studied at degree level in UK and the States in several institutions and diploma and another degree in landscape design and have done several intensive extra curriculum further education experiences on various programmes to do with the development of Civil Society. And I learned on the job in lots of restaurants, clubs, bars and pubs and have spent the last twenty five years learning first how to be an employer then how to be a negotiator and hard nosed businessman against a recalcitrant thick skulled devious incompetent and dishonest pubco. And along the way picked up 'how to represent yourself in High Court' and how to be a campaigner for fairness, freedom and common sense in the pub sector, which has helped open my eyes and understanding to the dysfunctional nonsense we are steeped in in every other area of life.

My Father said to me "Mark, my first ever Head teacher said to me at my first job in 1954: 'Roy, if only one government would give teachers a whole (political) term to allow us to implement the 'improvements' they insist on imposing on us, every year, every government no matter what shade they are, just once, we might have a chance of actually being able to teach children properly. As it is we're always changing everything we do and no one is ever able to teach effectively and the children are the ones who don't get the education they deserve". He then went on to say that in his forty years in teaching there never was a year when a government let the professionals get on with teaching.

Being primed by this insight I noticed the constant pressure of unnecessary flux and change for the sake of achieving 'better standards' at every level of schooling in my own experience and then through the eyes of friends who are (often exhausted, stressed and fed up) teachers, many of whom I met through their being customers of my businesses...

So I've lived my entire life around education practice and theory, even working alongside it as a governor... As most of us do.

My ex's school was Ofsteded a few months ago and, after decades' consistently getting Good to Outstanding and occasionally Could Improve in one subject area, in a catchment that's one of the hardest, toughest, mixed bags you can imagine, in Europe let alone the UK. Ofsted inspectors stormed in, gave shit assessment on criteria completely different from any previous benchmarks which, in one to one feedback, left four teachers crying, they slammed the school and dropped it into 'Poor, Must Improve' category.

There's an ongoing serious complaint with Gove's office about that dreadful shambles - this is a department that responds exactly as Brandon Lewis does, like 'not bovvered', but in posh tones, or a Parking Enforcement Office - routinely ignoring correspondence while stepping up a war of attrition and laissez faire harassment on the street.

This week the school was inspected by the LEA, Southwark, and panned even harder by a bunch of jumped up Goodies. One of them gave one teacher an 'inadequate' assessment ofter a teaching observation, on a lesson plan which the Ofsted inspection (remember they trashed the school over all) had declared to be 'excellent' with 'Outstanding' elements. When the teacher challenged the local inspector about this and told them about Ofsted's view she was called 'a liar' to her face.

You may think being called a liar in sick circumstances is taking the biscuit. You may think, as a responsible employer, that if you treated an employee like that, you'd find yourself in a Tribunal being fined several thousand quid for being a totally incompetent jerk who doesn't understand the basics of responsibility in their position of power.

Think that's a little bad? Put it into context with this: My ex's inspector told her that she spends too long on registration in the morning... "Ten minutes for registration is too long. You're wasting valuable learning time, the children should be focused on learning activities from the moment the school day begins. You could have white boards ready before the come in for them to get working on, for example" etcetera there was more.

My ex is head of reception, the children in her charge as one of the few significant responsible adults in their lives are aged Four to Five.

This country is a backwater of ignorance and stupidity.
Posted by J Mark Dodds at 6:53 AM