A Great Example of Landscape.

I don't know about Over There but Over Here in the UK here is an interminable, whining, whinging, ever re-volving, never abating debate about the visual impact of Wind Farms on the landscape. 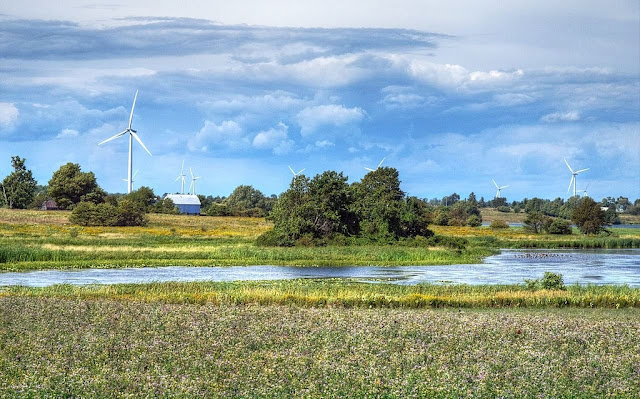 A lot of people really HATE the idea of windmills - they say they scar nature etc etc etc and they drag up detailed arguments that PROVE how everyone who's not strongly anti wind power generation have been hoodwinked by environmentalists into believing the benefits - they tell me the turbines consume substantially more energy in their life cycle than they generate, that wind doesn't blow most of the time and then, most of the time when the wind does blow, the turbines have to be stopped so they don't break with the force of the wind and so on and so on. And when all that's done they go on and on and on about the concrete; and the traffic congestion when the farm is being built, and the pollution and the shipping costs and the understated lifespan of the equipment and the dismantling and clean up costs and the birds hitting the fans and the sheep being made barren through fright ... it just goes on and on and on. And on. And that isn't even HALF of it. There's all the diesel that's burned getting them from China to the UK and the steel from India. Good grief it's boring.

It is VERY tedious being talked to, at and over by evangelical proselytising anti wind hard liners the moment they sense someone who's not rabidly anti wind (me) has walked into their life.

They look good in the landscape to me, I like them, wind turbines spread along a horizon says to me: "WOW! Aren't humans amazing aren't we ingenious?" The British landscape was littered with windmills until 17th century.  I don't know but I bet a lot of people were grumbling and royally pissed off about steam taking over from wind back then.

People hate change. They demonise the new, even when it's not a bad thing, often when it's a good thing. I don't understand it.
Posted by J Mark Dodds at 3:06 AM