CAMRA the Campaign for Real Ale

CAMRA the Campaign for Real Ale is 50 next year. 30 thousand pubs have closed since its first birthday.

Behind the scenes of the frontline campaigns to protect pubs from insatiable, rapacious, unfettered offshore based private equity greed turning pubs to alternative use there is always a spat rumbling on in Discourse, popularly monikered Discord, CAMRA's online disussion forum; I posted this there today. It will get 'multiple community flags' for 'going against forum rules' and upsetting the trainspotters and will be taken down by admins. I post it here so posting it wasn't entirely a waste of time. I LIKE CAMRA - it is a NICE organisation with LOADS of REALLY LOVELY members who are in it for all the right reasons. I WANT CAMRA to be wildly successful instead of a fig leaf for a corporate establishment that's running quality beer and pubs into the ground forever. 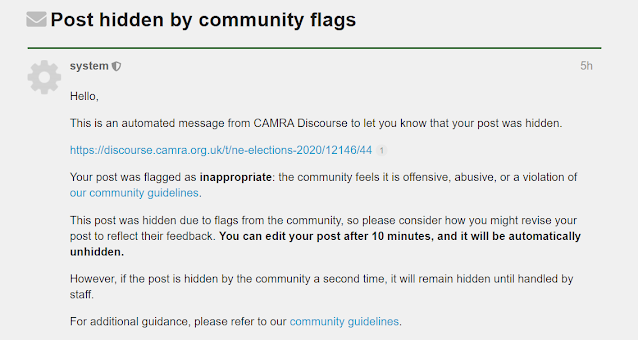 Try standing back for a bit of perspective: YOU are National Director, Pub Campaigns, for one of Europe’s and the UK’s largest, most successful consumer organistions - Tom Stainer, CEO, is your employee… Tom doesn’t need to list all the things CAMRA ‘does’, no matter how impressive and how long that list is the facts outside of Discourse speak for themselves: IF CAMRA were effective there would be no Protect Pubs. IF CAMRA were effective there wouldn’t BE a Campaign for Pubs. You need to wake up.
Measurably: FIFTY YEARS of CAMRA has brought the UK to the point at which (a) there is NO fair route to market [ie availabliity of quality real ale etc other than global brands in most pubs] for real ale, cider and real perry and (b) The Pub as a culturally unique, precious, secular social institution is in existential crisis.

1. Figures on beer: Beer and brewing; small craft brewers - the people who have driven the British Beer Revolution for the last 20 years (an exciting transformation of the beer market which CAMRA undboubtedly paved the way) are kettled into 6%-8% of overall beer volume sales to purpose built pubs - that is the traditional Local, all over the country where, ideally OUR members want to access and consume those beers. Most beers don’t get into most pubs because: Big Brewing and Big ‘Pub Companies’. Pioneering brewers are leaving brewing because they cannot get their beers into pubs and their on sales volumes have been eroded by more and more competition from new brewers coming into the same tight wholesale space for quality beer. This is a fact. If CAMRA doesn’t know this there is something really wrong but whatever, CAMRA is not acting on it.

You have a good point there Graham - however, I am patient. I was a tied tenant for 16 years, I suffered indentured labour for 16 years while running my £16K a week turnover, award winning, pioneering [tied] pub which was a run down, exhausted, moribund heap of failure when I committed to a tied contract in 1995. I learned the hard way, I understand what is going on and have been prepared to endure penury in determination to ensure the truth does not go unremarked. My experience led me to vow never to rest until there is an end to the inequity of the beer tie, and to co-founding the Fair Pint campaign. I made that vow in 2008 and stand by it.

Thousands of people’s lives are destroyed by the mendacity of tied pubcos every year. Tenant business failure and churn is endemic in the ‘business model’. Tenant failuire is the bread and butter of the tied pubco hegemony.  None of this is exaggeration, This is the way it is. NONE of this is in the consumer interest, at all. It erodes consumers rights to access great Local Pubs to use as places of Good Fellowship, all over the country.

CAMRAs denial of this and its fiddling while an existential crisis has been unfuring across the national pub estate is unconscionable and dileterious to the fostering of civil society. It is damaging Britain’s unique Sense of Place and people who point this out - as I do out of concern for the Right Things, people who speak truth to power - are sidelined and put down as irritants and obsessives. The status quo pervades almost every level of our society - the myth that we have changed and do not use pubs because society has somehow moved on since the Beer Orders is promulgated by the British Beer and Pub Association and has been picked up by every channel of dissemination about what is happening The Pub to the extent that the beer tie is NEVER analysed or discussed in detail at any level in national discourse - even government ministers and MPs wax lyrical and ask the chancellor to reduce beer duty because the burden of tax is killing pubs. It is not. It is the burden of private equity and financialisation of OUR cultural assets that is killing pubs and driving a false narrative across every level of society.
The reason ‘we’ don’t go to pubs the way we used to is because pubs aren’t fit for purpose. They aren’t fit for purpose due to the Great British Pubco Scam. Pubs that have been venally asset sweated, ransacked by careless spivs posing as custodians of the best of British Good Fellowship. Pubs chronically starved of investment for thirty years under their 'low cost entry to business' model of enticing naive people into indentured labour as they cover the costs of landbanking until the pubs are sold for alternative use; knackered, run down, sad miserable pubs no one in their right mind wants to meet friends and family for a get together in.

The clue is in the ownership of OUR pubs - all on public record and reported widely in the financial press. OUR pubs are owned by hedge and vulture funds that exist to sweat assets and convert 500 hundred years of priceless, irreplaceble accrued social capital invested in OUR pubs into their cash in offshore tax havens. None of this is secret. These organisations do not invest for anything other than private profit at the cost of public good. The Beerage is everywhere and the status quo has been bought up and regurgitated by beer bloggers repeating the myths and labelling the truth as conspiracy theory. Truth is trashed and myth is picked up by members of the British Guild of Beer Writers and reported as if it were fact. They, lazy romantics, without knowing it, are all in it together and the Death of the English Pub is within sight, tangible 50 years after CAMRA was founded to stop that very thing happening

There’s nothing absurd about it at all.

Check the objects. Look at the stats. What is absurd is this forum for 192K members is so underused by the membership. People don’t use it because anyone who doesn’t toe the unwritten rules of self congratulation and applause for the success of sending 80K emails to sociopaths asking them to give tied tenants a rent break when obviously they will do nothing of the kind - the record proves it - is absurd.