IN 2009, which seems like Back in the Day when it comes to Pubs and what's been happening to them, Nicky Francey was on the front cover of the national catering industry magazine Caterer and Hotelkeeper The Caterer >< this article came a year after Nicky co-founded the Fair Pint Campaign with Gill Morris, me, Steve Corbett, Dave Law, Simon Clarke - Mike Bell, Brian Jacobs, David Morgan and a handful of other shadowy people who stood to benefit personally in very self serving ways (as Ted Tuppen, the lying cheating double dealing CEO of Enterprise Inns, characterised almost bankrupt penniless people like us voluntarily fighting for freedom and fairness while Tuppen himself was trousering over a million a year in performance related bonuses on top of his million a year salary for rapaciously asset stripping British villages, towns, city centres, communities, our unique culture, our traditions and the very essence of Britain's own particular secular Sense of Place). 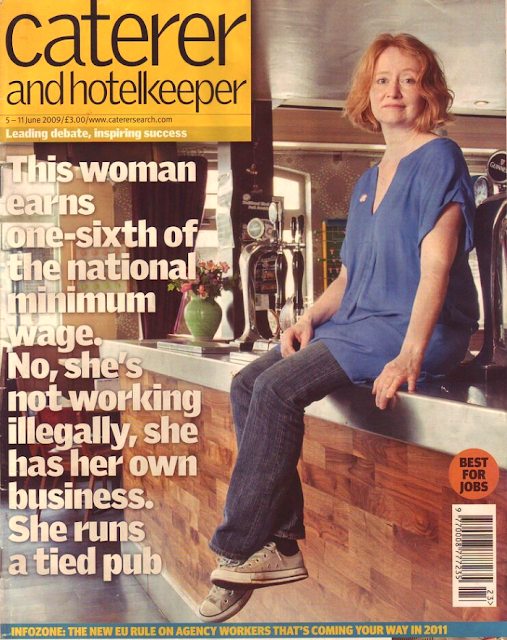 Mind you, to be fair to Ted the Shred he wasn't alone in the private equity feeding frenzy that's been devouring the best of Britishness since the advent of Thatcher's inspired 1989 Beer Orders and the invention of that truly ironically British thing: 'The non-brewing pub companies' companies who hate beer and pubs and people but love high ROI - or: Money For Doing Nowt... Into the naughty corner with Ted go Punch Taverns, Star Pubs and Bars (formerly Scottish & Newcastle Pub Company) owned by Heineken (yes, they are all at it), Admiral Taverns, Marston's and Greene King. Brutal bastards every last one of them when it comes to tied pubs they own, along with dozens of smaller bottom feeders such as Hawthorn Leisure and New River Retail, companies pretending to have an interest in pubs but DESIGNED to render pubs into alternative assets. Ie: cash to make their owners and directors even more fat and LOADED than when they borrowed OPM to set up their asset stripping vehicles.

What has changed in that time? Our work led to the implementation of the Pubs Code in 2017... but materially, nothing much has progressed. Ted Tuppen retired.

The pubco's continue to asset strip our heritage to the point of 1,200 pubs flogged off for alternative use every year.

I was evicted from the pub and was homeless for three years.

The Pubs Code came into place last July after ten years' of agitation and wrangling.

Campaign for Real Ale turned native and pulled out of pressurising the government to outlaw the practices of beer tie abusing pubcos and brewers.

I moved out of the family home. My sons became teenagers.

Nicky and I became life partners rather than business partners.

I did a PhD equivalent on research into the #GreatBritishPubcoScam have been on committee of several community pub campaigns - have been to countless marches and protests about pubs. Have helped with campaigning.

Nicky started a new successful career outside of the pub sector (OBVS) in high profile restaurants - straight from being a failed publican to the sit back and relax thrust of central London high end catering.

And we both invested in Berwick Brown Bear to be proof of principle for the People's Pub Partnership which is another step on the route to proving the existence of pubco's has seriously damaged Britain's natural human history timeline.