A TWEET came up today which got me thinking - of more below - on a Facebook link, which reminded me about Perfect Pint ( www.perfectpint.co.uk ) who are doing some really good things... Salut Perfect Pint! Their website is good to look at and simple to use. They have a slick well thought out promo / intro video:

They've done an APP that guides beer fans to their favourite beers, all over the UK (which if the reviews left on the Google Play download are representative, needs some work to get working as smooth and slick as their website - but that's fine and they say 'as it is a first release and a learning curve for both yourselves and us, please do send us any and all feedback you may have. We'll be updating the app regularly to make sure it is what everyone has been hoping for!***' which is fine by me...
Their Twitter account has almost 30,000 followers and their Facebook page over 22,000 likes. From the adverts on their site it looks like they are monetising (making money) their efforts. Good on them, it really is good stuff.

I talked to them a few years ago when they were getting going...  it was set up by some people who own pubs and like ale and were always having difficulty figuring out where they could find a decent pint when they weren't running their own pubs. They don't want to get into looking at why pubs are closing they're interested in beer and their pubs aren't tied - 'and because all that is a bit negative isn't it really' isn't it (?) - well, it's happening, everywhere, and no one can miss it. SO, I personally don't see how it's 'negative' to acknowledge this, point it out, and have a go at figuring out WHY it's happening. Anyway

What most people who write, commentate, vlog and talk and lobby about when it comes to pubs in the UK is not about pubs. They do it all about BEER. Now I can understand this, slightly, but the fact is that without PUBS there's nowhere to buy BEER. That is why micro pubs are popping up all over the country and people, communities, everywhere, are becoming so concerned about THEIR PUBS ARE CLOSING that they are beginning to mobilise to try and buy their Locals as the Pubco's try to flog them off for alternative use. The efforts to fight the tide of closures are huge, stalwart and determined but in the face of the torrent of collapsing failing pubs it's like a kiddie with a finger stuck in the bottom of a crack in a dam.

For a short thing it has a lot of irritating misspelling and grammar. Its sentiments are that: Sentimental.

It misses the point completely which is that pubs, while crucial to the community, cannot serve their community unless they're financially viable - and pubs increasingly are NOT financially viable because they are being asset stripped by pub companies and being run into the ground while being supplied with beer at outrageous prices up to double open market rate and customers are abandoning them in droves, looking for better appointed 'pubs' that are, as often as not, part of well funded managed pub estates usually owned by the same pubco's who are closing the pubs which people like Perfect Pint are asking people to go into and spend a tenner or more to prevent them from closing. It's silly. Customers are not going to go and stand in a worn out pub and buy beer to save it from the economic realities surrounding its ownership and the imbalance of risk and reward there is between the freeholder and the publican. 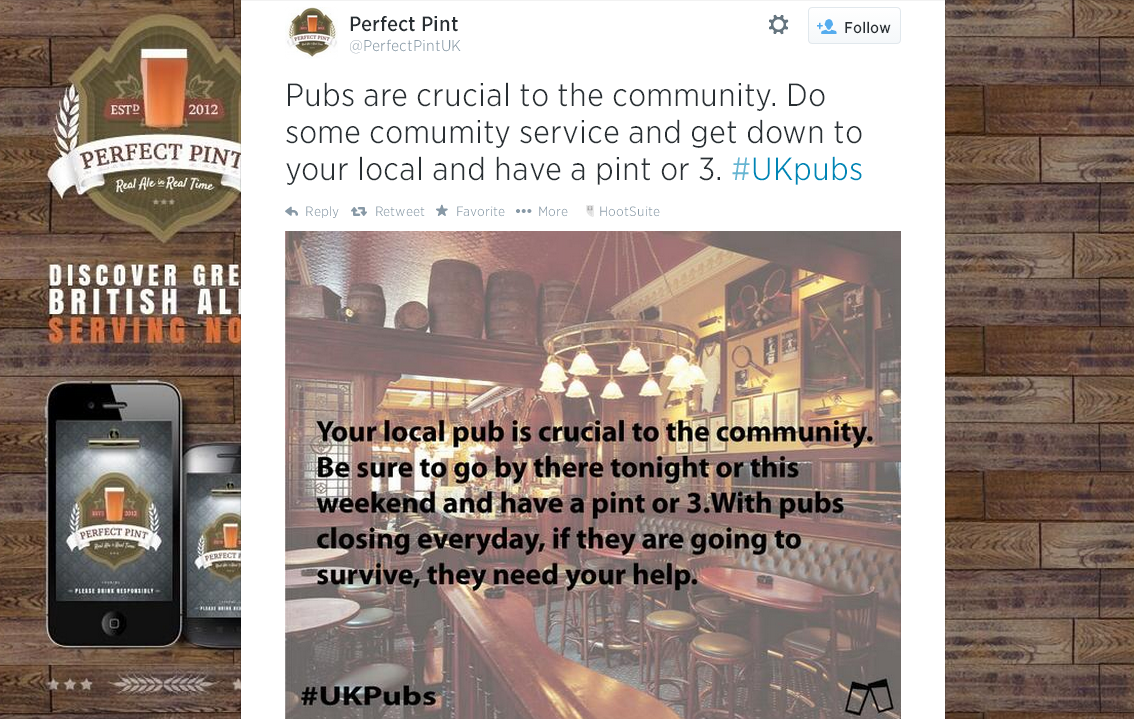 It's not rocket science - to be fit for purpose for contemporary consumer expectations -Pubs need proper support, proper investment, proper management and good products they can sell on at a reasonable mark up so they can be financially sustainable. This is NOT what the pubco's do in the UK and that is why pubs are closing everywhere.


So Perfect Pint: Sort out your spelling and grammar and get with the pro pub programme instead of promulgating part of the pro pubco propaganda as peddled by the pub sector poodle, the BBPA
whose job is to obfuscate about the real reasons for serial pub business failure (CHURN) all over the UK which are underpinned by excessive tied rents and supply prices and instead hand wring about the epidemic of pub closures being due to pubs having to sell dead expensive beer because of beer duty, having incredible running costs because of red tape, business rates and a multitude of other external things - like the weather and England not winning the World Cup - the freeholders are powerless to do anything about, and they ask, no demand, government and the taxpayer for tax breaks and exemptions from red tape and for millions of customers to go to the Great British Pub instead of to the supermarket... It's pathetic. We just need pubco's to look after their pubs and begin to managed their affairs responsibly.
Posted by J Mark Dodds at 10:26 AM