Work Hard & Be Nice To People

I found this blog which has an entry concentrating on other people who've found that 'Work Hard & Be Nice To People' poster by Anthony Burrill and then went on to muse with a friend, Jude Calvert-Toulin, on our children's and their children's likely destinations in life. 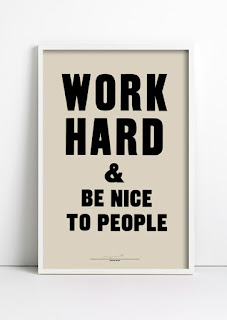 Wow! Five days can be a long time at any time of year...


Well, the same, Jude. You've made me think a lot. And I'm glad we had the chance to meet again from afar. From early on, being an only child I had a lot of time to reflect on things. And I thought that if we could only teach children not to repeat their forebears' errors we'd have a chance of creating a civilisation that made sense. And thought on the problem that is, how do we learn from the experience of our elders when we haven't had their life encounters and how do we distil the accumulated knowledge/wisdom of mankind into every child so we can be a collective that is better than the generations preceding us? Then realised it must be one of those inscrutable things that people have mused over for generations since time immemorial. Considering that Sophocles et al had made deeply insightful observations about the human condition which got published, disseminated, digested and considered by millions of people, across generations and literally thousands of years, yet we're still searching for answers to the same questions the early philosophers were mulling over and wrestling with since the dawn of consciousness.


Then, perhaps thirty years after those thoughts condensed, I had a child and began to understand what a, and it's not too exaggerated a term to use, miracle it is that 'WE' ever even managed to get out of caves let alone begin to really reach the stars to become anything like the 'civilisation' we've created, bound for self destruction even though it is. And two years on we had a second child, the shock of which, added to the chaos having the first child brought to our life, brought me to thinking it's no wonder there's so many dysfunctional and emotionally damaged people all around us. Having children is like an express train wreck to normal lives. And, in fact, it's amazing we all appear pretty balanced on the surface at all. and it's why we can't even organise household recycling en mass and get it into neat piles of segregated material. And how consumer society has taken its grip. And how people are, largely, just Working For the Man instead of concentrating on making sure their kids aren't about to repeat, repeat and do again what was done unto them


Something like that.
Posted by J Mark Dodds at 3:11 AM