RE: Workload doubles at Pub is the Hub

With Pub is the Hub: "Funding is provided by donations from brewers, pub companies and other organisations with an interest in the rural economy." which is the only cautioner on the facts - the money's coming from the people who cause the disease and, like it or not, PITH is faced with an impossible task: take the pubco shilling or die. Doing good here is inescapably doign Pubco Wash at the same time and there's no getting away from it.

After this inescapable observation; Publican Sam said it already - £160K is bugger all for John Longden to eke out among 40 projects with further inquiries about their pubs from across 81 communities UK wide - which surely is just the tip of the iceberg of pent up demand for emergency measures to save the last pub in a community - everywhere the trickle of pub failures and closures is becoming a flood across an industry which is, at its core, in dread denial about what's happening to the pub sector; which is:

Britain is losing the heart of its communities. And it's the Beer Tie wot did it. 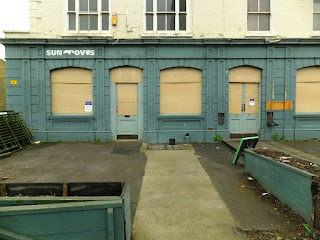 My apologies to anyone (?) who may notice that this image has been posted here by me already somewhere else: I don't remember doing it.
Posted by J Mark Dodds at 8:57 AM