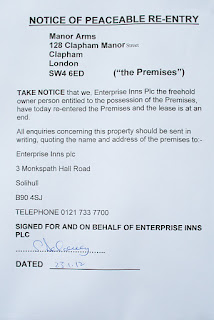 We live in a class driven society where the rights of the wealthy, as defined by property ownership, and those who own the property are laid down in law and defended above all else. This is because when the foundations of the legal establishment were laid down the wealthy owned the land and the wealthy of course also happened to be the body of the judiciary who were writing the law - and the people in government, below the royal family, were their cronies, relatives, friends, business associates and school mates. Even if they were competitors at some level, when it came to their own security they all stood together. Together they removed the rights of poor people to own land and invented the lease. And rent. eBay the tithe. And the tie.

Not much has changed.

Corporations and their descendants have to some extent replaced many of the property owning families but really just sit alongside them protecting their inalienable, god given right to do very little labour to justify retaining and increasing their wealth.

It's this sticking together of landed families and property owning corporations that headed off a revolution in the British Isles when much the rest of the world was shaking off some of the burden of class based inequity. Violently. And why we're still a cap doffing curtsying proletariat and make up 99% against the 1% who own everything.

Legally corporations are as individuals. They have the rights of the landowner, the property holder, with the possible difference that the corporate brain may behave less responsibly than the individual because the executives look to their own security and wealth development in their own lifetime and possibly that of shareholders' rather than to the long term which, arguably, a family interest in property ownership may stimulate and sustain for the long term.

If you see the eviction notice on the Manor Arms in Clapham you'll see that Enterprise Inns is cited as the 'person' with rights over the property. It may seem like a small detail but it's at the bottom of everything that's wrong with our society and the root cause of the illness in the pub sector: http://bit.ly/xIUJWW

Whatever. We've got a long way to go. Unfortunately.

I like that eBay the Tithe above. That's the iPhone for you: always putting words in your posts.
15 minutes ago · Like · 1
J Mark Dodds Yes. I went onto eBay and bought The Tithe. I now have rights, although still a bankrupt former proletarian publican, to levy a ten percent charge on all transactions on eBay and on every financial exchange made throughout and in and out of the UK.
3 minutes ago · Like
J Mark Dodds I'm just going to sit back and watch my fortune grow, for generations, on my arse, and my children's children's arses, doing nothing - we'll pay stupid twats to run the Tithe for us, make them feel like they're important, and we'll get on with things like shooting, hunting and fishing and buying more property with the money coming in from the Tithe. Then we'll have lots of yachts and open topped sports cars. It will be spiffing. Really looking forward to it.
Posted by J Mark Dodds at 4:06 AM